In news of Candles for Paige we had 8 candles as of this post. Remember, candles go out after 48 hours so keep lighting candles for Paige, her family and her three children.

On This Day In History...

...in 1979, the deposed king of Ford Motor Company ascended to the throne of the troubled Chrysler Corporation. Lee Iaccoca had been the president of Ford Motor Company but in 1978, Henry Ford II fired him. Iaccoca took the helm of the sinking ship that was Chrysler, not realizing just how bad it really was. As he said, the day the checking account balance hit $1,000,000, he knew how bad it really was. "For a car company," he later said, "Having a million dollars is like having one dollar in your wallet." He reduced his salary to $1.00 and began a pogrom of cutbacks, layoffs and sought government loan guarantees. He appeared on Chrysler television spots, claiming, "If you can find a better car, buy it!" By 1983, Chrysler had returned from the brink of bankruptcy to being a driving force (so to speak) in the marketplace and repaid all the government backed loans, all in less than 4 years. "We at Chrysler borrow money the old-fashioned way," he said in a television spot. "We pay it back."

...in 1519, Ferdinand Magellan set sail from Spain to search for a shortcut to the Spice Islands. Since he was about 400 years too early for Teddy Roosevelt and the Panama Canal, Magellan sailed south along the coast of South America until he found the straits that separated South America from Tierra del Fuego and today, bear his name. He was the first explorer to find the Pacific Ocean, which was so named by him because of the calm waters. Magellan died in the Philippines, but two of his ships continued onward. One attempted to return via the same route, and was never heard from again. The Vittoria continued west, rounded the Cape of Good Hope and returned to Spain, the first ship to circumnavigate the globe. 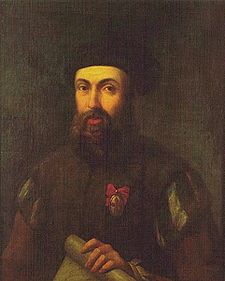 ...in 1973, former tennis champion, Bobby Riggs (55) took on the top women's tennis champion, Billy Jean King (29) in a widely promoted and widely watched tennis match known as "The Battle of the Sexes." Riggs was a self-proclaimed chauvinist and claimed that he could beat any woman in a tennis match. The match was held at the Astrodome in front of 30,000 people and an estimated 50,000,000 people watching on television. King arrived in a gold sedan chair, carried by men dressed as slaves while Riggs arrived in a rickshaw pulled by female models. Howard Cosell called the play-by-play as King beat Riggs 6-4, 6-3, 6-3. The victory was seen by some as a well-crafted publicity stunt but by others as a tennis victory for King and a victory for women's rights in general.

Billie Jean King and Bobby Riggs clown it
up for the camera before the match.