In news of Candles for Paige we had 5 candles as of this post. Remember, candles go out after 48 hours so keep lighting candles for Paige, her family and her three children.

...in 1962, Lieutenant Colonel John Glenn was launched from Cape Canaveral, Florida aboard the Project Mercury space capsule, Friendship 7, on his way to making the first orbital space flight by an American. Glenn was not the first, in fact, Russian Cosmonaut Yuri Gagarin was the first man in space and the first to orbit the earth in 1961. Glenn's mission was the third American manned space flight, Alan Shepard, Jr. and Virgil "Gus" Grissom made sub-orbital flights and Russian Cosmonaut Gherman Titov made a record-setting 17 orbit flight and stayed in space for 25 hours. Glenn's launch was watched by millions on television - this reporter remembers every kid in his school glued to a television set in their own or in another classroom. Glenn became a national hero, and as a result, NASA grounded him, rather than risk the death of an icon on future missions. Frustrated with a lack of flying time, he left NASA and went into politics. After serving four terms as a Senator from Ohio, NASA finally re-certified him for space flight, and at 77, he became the oldest person to fly in space, as a payload specialist aboard the shuttle Discovery. 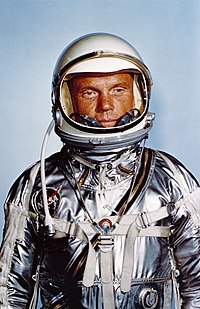 
...in 1972, the death of Walter Winchell brought an end to a radio and newspaper career that was admired or reviled, depending on which end of Winchell's poison pen you were on. He began as a Vaudeville performer but in 1922, he began to write for the Vaudeville News. In 1929, he began to write a gossip column for the New York Daily Mirror and in 1930, he began a radio version of his newspaper gossip column. He had a radio style that was all his own, a rapid-fire reader of his material and he was once clocked delivering his news at 215 words per minute. His witty and juicy style was popular and he started every broadcast with "Good evening, Mr. and Mrs. North and South America and all the ships at sea. Let's go to press!" He played himself in several films and was characterized in many others. There is speculation that in the movie Laura, a character named Waldo Lydecker was inspired by Winchell, played by Clifton Webb. Winchell's reporting was very popular but was called yellow journalism by his critics. His career began to fade in the 1950s as television took over from radio. If ya can't lick 'em, join 'em, and his last major employment was as the narrator for the television series The Untouchables. Winchell had thrown his support behind Senator Joe McCarthy's Communist witch hunt didn't help his career any, and when he died, it was reported that the only person to attend his funeral was his daughter.

...in 1972, plans to dig a tunnel between France and England were announced. Dreams of digging a tunnel beneath the English Channel date back to at least 1802 when Napoleon drew plans for a tunnel. France and Britain took advantage of new tunneling technology to actually tackle the monumental task. Huge machines set out from each shore of the channel and met in the middle on December 1 1990. (Click on the link to see the update that describes the Chunnel.) The Chunnel went online in 1994.

...in 1942, Lieutenant Commander Edward Henry "Butch" O'Hare became the first American Ace of WWII. O'Hare took off from the carrier Lexington to make a surprise raid on Japanese forces at Rabaul but instead, became an ace in one mission. Most people know that the American strategy in the Pacific was to "island hop" and secure island after island, moving ever closer to the Japanese home islands. Conversely, the Japanese strategy to expand their empire was to island hop, taking island after island, expanding the sphere of influence into the Pacific. The Japanese had taken the island of New Britain and built a major air base at Rabaul on the tip of the island. The base gave them virtually unlimited offensive access to the Solomon Islands, the next target of their strategy. The Lexington sailed into the Coral Sea to challenge that access, and O'Hare's mission was to bomb and strafe the air base. Instead, the ship's radar picked up Japanese bombers headed straight for the carrier. O'Hare and his squad aimed their F4F Wildcats at the bombers and in four minutes, O'Hare personally shot down five of the G4M1 Betty bombers, earning him the title of "Ace." He was awarded the Medal of Honor for his bravery and deadly aim. O'Hare went missing on November 26, 1943 in a night fighter operation. It is assumed he was caught in crossfire, his plane was never found. On September 19, 1949, Chicago's old Orchard Depot Airport was renamed O'Hare International Airport. (There is an urban myth that O'Hare Airport is named for a gangster in the Al Capone organization, which is not true. Butch O'Hare's father was a bookkeeper with Capone but later turned state's evidence to help convict Capone of Income Tax Evasion.)

http://upload.wikimedia.org/wikipedia/en/thumb/1/15/Butch_OHare_F6F-3.jpg/180px-Butch_OHare_F6F-3.jpg
Butch O'Hare in the cockpit of a
Grumman F6F-3 in 1943. The ace
would go missing in September. In
1949, in his honor, Chicago's
Orchard Depot Airport would be
renamed O'Hare International Airport.
The official FAA designation of
Orchard Depot was ORD, which
remains the designation of O'Hare
to this day. That is why, when
you come to conference and fly
into O'Hare, your luggage tags
show ORD.