In news of Candles for Paige we had 3 candles as of this post. Remember, candles go out after 48 hours so keep lighting candles for Paige, her family and her three children.

...in 1785, the first men to fly across the English Channel, Frenchman Jean-Pierre Blanchard and American John Jeffries, accomplished the feat in a gas balloon.

...in 1924, George Gershwin completed the Rhapsody in Blue, the landmark jazz symphony that is popular to this day. The piece was commissioned by Paul Whiteman for his big band. The distinctive opening features a clarinet starting with the lowest note possible on the instrument, quickly rising to the top register, using a technique called a "smear" to a high C, a technique that only a few clarinetists can achieve. Gershwin also wrote An American in Paris, made famous in a Gene Kelly movie of the same name. Along with his brother, Ira, he wrote Porgy & Bess and the team wrote hundreds of familiar American songs. He died tragically in 1937, the result of a brain tumor that may have been caused by him being struck by a golf ball. His estate continues to collect royalties and he is estimated to be one of the wealthiest composers in history. 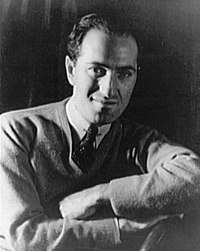 ...in 1940, the CBS radio network premiered Gene Autry's Melody ranch which would remain on the air for 16 years. While in high school, Autry worked as a telegrapher at his town's railroad station and in between tasks, he would sing and play a cheap guitar. A stranger passing through the station one day heard him sing and suggested he go on the radio. The stranger knew what he was talking about, his name was Will Rogers. He found success as "Oklahoma's Yodeling Cowboy" and became a mainstay of the Sears National Barn Dance. He co wrote and recorded the first gold record, That Silver Haired Daddy of Mine. In 1934, he was recruited to ride, play guitar and sing in a series of western serials and by 1940, he was America's Favorite Cowboy. During WWII, Autry joined the Army Air Corps and took his oath on the air. (He flew a C-47 in the Pacific Theater.) Roy Rogers took his place while he served. Later, Autry would star with Pat Buttram on the Gene Autry Show. Autry was also an investor and entrepreneur, even owning the California Angels as a very popular baseball owner. Autry is the only entertainer to have five stars on the Hollywood Walk of Fame and he was elected to the Country Music Hall of Fame in 1969.

...in 1999, the impeachment trial of President Bill Clinton began. He was charged with lying under oath and obstructing justice. Supreme Court Chief Justice William Rehnquist, under Article 1 of the US Constitution, was sworn in to preside over the trial, with Senators as jurors. President Clinton was the second US President to be impeached, the first being President Andrew Johnson in 1868.

...in 1985, GM opened Saturn Corporation as a wholly owned, independent subsidiary of the giant automaker. As time went on, though, it became obvious that Saturn was, in fact, a division of GM. Components and platforms were shared with Saturn's GM brethren, such as the Saturn Sky roadster that was built on the same platform as the Pontiac Solstice. It was announced in 2009, after the government takeover of GM, that the Saturn Division would either be sold off or close. In September 2009, a pending sale to the Penske Automotive Group went south when Penske withdrew the tender. Saturn, like Pontiac, ceased operation at the end of the 2010 model year, bringing an end to the 25 year experiment.

Roger Smith and F James McDonald with the 1985 Saturn