In news of Candles for Paige we had 4 candles as of this post. Remember, candles go out after 48 hours so keep lighting candles for Paige, her family and her three children.

...in 1994, Nancy Kerrigan was attacked at Cobo Hall in Detroit, after completing a practice session, one day before the US Championships and a month before the Olympics in Lillehammer, Norway. Kerrigan was favored to win both events. She was leaving the ice when a man (later identified as Shane Stant) attacked her, striking her on the right kneecap with a collapsible baton. Her father picked her up and carried her to the locker room, from where she was taken to a hospital for x-rays and treatment. The police followed the trail to Jeff Gillooly, ex-husband of Kerrigan's biggest rival - Tonya Harding. Gillooly hired Stant to perform the attack. Later in January, Harding admitted to being in on the plot to attack Kerrigan. The Olympic Committee prepared to drop Harding from the team, she responded with a $20 million lawsuit. The committee was blackmailed into allowing her to stay on the team. She embarrassed the United States Olympic Team and herself with her antics at Lillehammer. Harding finished 8th place, Kerrigan won the silver medal, losing out to Oksana Baiul of the Ukraine. In the wake of the affair, Harding was fined $100,000 and sentenced to 500 hours of community service, she was stripped of her 1994 US Championship and banned from amateur skating - for life. Her reputation and career went downhill from there, including nude videos and boxing.

Nancy Kerrigan was attacked on this date, but
was able to overcome the damage and won the
Silver Medal at the Olympics.

...in 1912, New Mexico was brought into the union as the 47th state. It started out as a territory of Spain, explored by Francisco Vasquez de Coronado in 1540. When Mexico gained independence from Spain in 1821, New Mexico became a territory of Mexico. It was ceded to the United States in 1853 as part of the settlement of the Mexican-American War. The Apache and Navajo resisted settlement by Spain, Mexico and the United States, but when Geronimo surrendered in 1886, the hostilities ceased. The population grew after that, with ranching and the coming of the Santa Fe Railroad in 1879.

...in 1936, the Warner Brothers studio, under Tex Avery premiered a new cartoon called Gold Diggers of '49. The cartoon starred "Beans" and featured the second appearance of a new character named Porky Pig. The following year, Porky would receive a new voice, that of Mel Blanc.

...in 1973, A Mercedes-Benz 770K convertible sedan was sold at auction for $153,000.00, a record price for any vehicle at that time. The 770K series was a specially designed car that was only used by officials of the Nazi party and this particular car was supposedly a parade car used by Hitler himself. The owner displayed the car in Las Vegas and had a special display trailer built for the car, so the car could make a circuit of auto shows in the late 1970's. It is, reportedly, in the hands of a Russian collector now, purchased in 2009 as part of a package of related Nazi vehicles.

Der Fuhrer takes a parade ride in what may, or may not be, the subject
vehicle. At least two of the 770K convertibles were built.

...in 1973, Schoolhouse Rock premiered on the ABC Saturday Morning cartoon lineup. In the early 1970's, an advertising executive (David McCall) was disturbed that his 11 year old boy couldn't remember multiplication tables but did know the words to every popular song on the radio. He decided that maybe the trick was to teach kids with rock 'n' roll, and he asked pianist Bob Dorough to write a song based on the multiplication tables. The result was Three is a Magic Number. McCall presented it to Michael Eisner, now the CEO of Disney/ABC but who was, at the time, in charge of children's programming. Eisner immediately bought it and ordered more! Each episode is three minutes long and teaches a lesson to a snappy tune. The episodes aired from 1975 through 1985, won four Emmys and are now available on DVD. Some episodes, such as How a Bill Becomes Law and Conjunction Junction used to be seen on YouTube. You might still be able to see the lesson that started it all, Three is a Magic Number up there, too, but perhaps not, as Schoolhouse Rock has come under control of Disney. 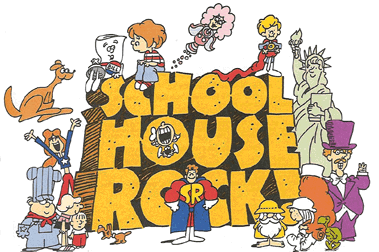