In news of Candles for Paige we had 15 candles as of this post. Remember, candles go out after 48 hours so keep lighting candles for Paige, her family and her three children.

...in 1942, the Japanese army occupied American territory in one of the least-known oddities of World War II. On this date, Japanese soldiers took Attu and Kiska Islands in the Aleutian Islands. The Japanese were still smarting from their rather decisive loss at Midway Island, but still managed to expand their defensive perimeter by taking the two islands that are a part of Alaska. (Some historians believe this was a diversion to lure the US Navy into a trap at Midway, but other historians believe this was a deliberate attack to expand the Japanese perimeter.) The Japanese killed the 25 Americans who were defending the island of Attu, then interred the few indigenous inhabitants. They did the same at Kiska, although there was no natural population as Kiska. One year later, the Americans would retake the islands, killing most of the 2,300 Japanese soldiers on the island and suffering over 1,400 casualties. The airfield was used as a base for American bombers to harass the northern reaches of the Japanese home islands, just at the very end of the bombers' range. The bombing runs from the Aleutians did little more than to annoy the Japanese rather than inflict any great damage, but it did reinforce the fact, to the citizens of Japan, that their home was no longer invincible. (Charlton Heston was stationed at the air base here, where he was a radio operator on a B-25 crew. Can you imagine other B-25s hearing the voice of God over the airwaves?) 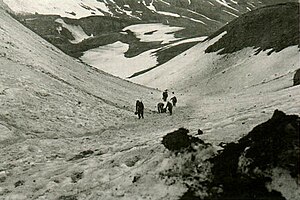 American troops haul supplies during the
battle to retake the islands. Note the snow -
this photo was taken in May 1943.

...in 1954, a design team began work on a new line of automobiles for Ford Motor Company. The new product was designed to fit into the market niche covered by GM's Oldsmobile and Buick lines, an area that officials at Ford thought was a gap between the Mercury and Lincoln lines. In the mid 1950s, the American auto market was demanding highly stylized vehicles, with lots of power, chrome and accessories. Ford was riding high, the Thunderbird was far outselling the Corvette and the Ford full-size line was outselling the Chevrolet. The new car was given a marque to honor Henry Ford's only child, Edsel Ford. Edsel's son, Henry II, at first did not want his father's name used but relented because he thought his father deserved a tribute. (Edsel Ford was a styling wiz although he and his father seldom saw eye-to-eye on business practices. He died in 1943.) Unfortunately, the economy went into a slide between the time the design go-ahead was given and when the car was released. It never lived up to its expectations and the response to the radical design was cool, at best. By 1960, the program was scrapped at a loss of $250 million to Ford Motor Company. While the Edsel is often held up as an example of a colossal failure, history has been more kind. The Edsel's radical design is actually appreciated today as a great example of 1950s styling and it is generally treated as a victim of an unfortunate series of circumstances.

A 1959 Corsair shows that the "horse collar"
grill was softened from the 1958 Edsel but was
still quite prominent. The "horse collar" grille was softened even more in 1960,
too late to save the marque, but a very similar grill design was
adopted over at GM into the 1960's Pontiac lineup that stayed
for many years.

...in 1966, Ronald Reagan became governor of California. His political talents became apparent as president of the Screen Actor's Guild from 1947 to 1952. He served two terms as governor from 1966 to 1975 during the tumultuous days of protests over the war in Viet Nam. 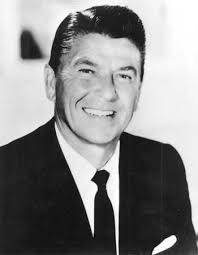 Governor Ronald Reagan (1966-1975) has
the distinction of being the only governor of
California to ever be elected as President of the
United States.

...in 1692, an earthquake in Jamaica destroyed the town of Port Royal, killing thousands. Port Royal was built on a island overlooking Kingston. Many buildings and homes for the 6,500 inhabitants of Port Royal were built right over the water, but as it turns out, it didn't really matter since the island is not based on bedrock. The earthquake turned the soil to a muddy liquid and most buildings just sank into it. A 40 foot tsunami followed the quake and carried the HMS Swan inland, where it settled on top of a building. Some critics said that Port Royal got its come-uppance in a Sodom and Gomorrah type of Armageddon. It was a haven for pirates and was known worldwide as a center of debauchery. It was described as the most wicked and sinful city in the western hemisphere and the lewdest city in the Christian world. Port Royal was abandoned and Kingston was rebuilt instead, and Kingston remains the largest city in Jamaica. Port Royal became known as "The City that Sank" and today is under about 25' of water. It is one of the most significant archaeology sites in the western hemisphere, yielding artifacts of the 16th and 17th centuries. The "digs" are closely controlled and are being performed by multiple teams of divers.

...in 1866, Chief Seathl of the Duwamish and Suquamish tribes, passed away in a village near to the city that bears his name. (Seattle.) The site was chosen by Euro-American settlers because of lush forest on the hills overlooking the location. The gold rush in California created a huge demand for lumber, so a sawmill was built and residents began cutting trees and skidding them down a chute to the mill. The street became known as Skid Road for the chute and became Seattle's main street. In time, the business district moved north and the old main drag became a gathering place for drunks and bums. To this day, the run-down part of any city has become known as Skid Road, shortened to skid row. (I'm sure Chief Seathl and the residents of the city are proud of that heritage.)

Chief Seattle, the only known
photograph of him, circa 1865.

...in 1776, Richard Henry Lee of Virginia returned to the Continental Congress with a directive from the colony of Virginia to introduce a resolution of independence from Great Britain. The motion read, “That these United Colonies are, and of right out to be, free and independent States, that they are absolved from all allegiance to the British Crown, and that all political connection between them and the State of Great Britain is, and ought to be, totally dissolved; that measures should be immediately taken for procuring the assistance of foreign powers, and a Confederation be formed to bind the colonies more closely together.” John Adams of Massachusetts seconded the motion. As the debate began, it became obvious to proponents of independence that they could not count on New York, New Jersey, Pennsylvania, Delaware, Maryland and South Carolina because their delegations did not have clear guidance on what their constituents wanted them to do. In order to create a delay on a vote, which would have meant certain defeat for the motion, Congress agreed to delay the vote while a declaration was written. An ad hoc committee was formed to write the declaration, the committee was comprised of Benjamin Franklin (Pennsylvania) John Adams (Massachusetts) Roger Sherman (Connecticut) Robert Livingston (New York) and Thomas Jefferson of Virginia. Since Jefferson was clearly the best writer of the bunch, it fell to him to write the draft. It was debated on July 1 and a vote was taken, and passed, on July 2. (That means America's Independence Day is actually July 2!) John Adams wrote in his memoirs that July 2 would forever be a day of celebration with pageantry, pomp and parades. He missed by two days, because the Declaration of Independence was adopted on July 4, 1776 and has traditionally become known as Independence Day.